skip to main | skip to sidebar

In light of a shift in topics, I'm moving my blog over to Yarn or Death. Hope you'll check it out!
Posted by Yarn or Death at 11:09 PM No comments:

Crochet does too have advantages over knitting

Yeah, I know. I have been totally neglecting this blog. I could argue it's because I've been doing things instead of writing about them, and that would be a good defense if everyone didn't know I love to babble.

I had a scare tonight. I went out to rifle through my crochet bag in the car looking for DPNs. I was actually worried they were missing, but I found them right off, no problem. The problem came when I came back inside and Good Kitty went running out. She hasn't tried to do that since a few years ago, when she dashed out and got menaced by the landlords' Jack Russell (oooh, scary!) and cried for her daddy to come rescue her. (Good Kitty adores the Mad Husband and only tolerates sharing him with me because otherwise the box would never get cleaned.) Luckily for me, she just wanted to wander around and gripe loudly for a couple minutes. Silly Good Kitty. I may have to give her a new nickname.

So anyway. Back to the yarn...

I'm discovering one reason that I'm better suited to crochet than knitting -- wait, two: crochet is faster so I have less time to get bored and start wondering what else I can start, and crochet hooks don't have to stay with a WIP like knitting needles do so I can start something else when my willpower fails.

Now would be the perfect time to start crocheting something, but I'm still burned out on crochet from the Customer Spotlight Sale so knitting it is.

I want to start some way-easy socks for the Mad Husband out of Trekking XXL. I have a free set of #0 DPNs, and a free set of #2 DPNs. The #1s are occupied (and I need to post a picture of what they're occupied with). The #1s would probably be the best choice for Trekking, but they're not available. I'm leaning toward the #0s because I tend to knit loose, but at this point I'm still rooting through all the Trekking socks on Ravelry trying to see if there's a clear favorite. Actually, there is: the #1s. Ooooops.

ETA: Tried the #0s. They sucked. Frogging and getting out the #2s now. If those suck, I'll just have to wait till I'm finished with the project using the #1s.
Posted by Yarn or Death at 10:10 PM 7 comments:

This is another one of those Murphy's Law corollaries, right?

Now that I have all this beautiful sock yarn, what I really want to knit is... linen hand towels.
Posted by Yarn or Death at 5:50 PM 4 comments:

Labels: you can't always get what you want

See, I have my bases covered.

StringTheory2.0 says you should always have three projects on the needles.

One that's about at your current skill level... 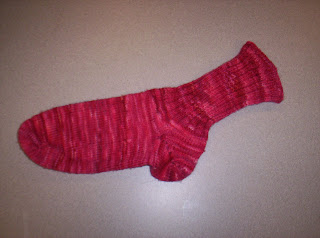 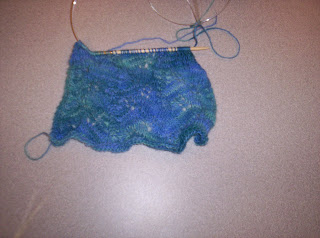 ...and one that you can do while drinking. 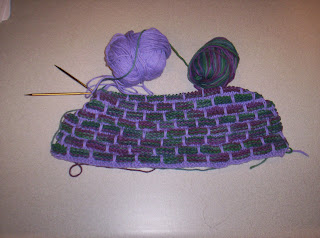 So I managed to drag my sorry butt to the Customer Spotlight Sale on Saturday, where I made a grand total of... ten bucks.

But I had a good time hanging out with Lizardsmells, who sold a ton of her awesome stitch markers, and visiting with other crafters. And overall a lot of money got raised for ovarian cancer research, though I probably would have helped raise more if instead of making my own things, I had used the money I spent on supplies to buy everyone else's lovely wares!

So now the sale is over and I'm free to work on whatever I want to, which would be totally awesome if I actually felt up to knitting. Whatever bug I've got (I'm calling it the Klingon crud) has wiped me out to the point where I needed a nap after watching a basketball game and knitting. Whoa, really intensive activity there. Worse, I've managed to misplace one DPN. I'm close to done on the first Saucy sock (the one I posted a while back) so I'm faking it with four needles until I can get a replacement, which feels weird. I see why StringTheory2.0 keeps pushing the circs. I'd lose my own head if it weren't screwed on.
Posted by Yarn or Death at 9:15 PM 3 comments:

This is not good.

I'm down to 38 hours till the Customer Spotlight Sale, and I thought I was prepared for the last push to the finish... I've got the yarn, I've even taken a vacation day tomorrow so I can stitch all day. So what's the problem?

I'm sick. Some kind of unidentified crud. My throat is killing me.

I'm not saying this is the worst possible timing or anything, but it's not promising.

Also, hand felting? Not nearly as easy as it sounds.
Posted by Yarn or Death at 11:27 PM 2 comments:

what I want to do vs. what I need to do, and The Sock Yarn Mania

I've been crocheting exclusively the past few days trying to make things for the Needle Nook's Customer Spotlight sale, which is May 3. That is, this coming Saturday. And I am so not ready. And I am so wondering why I thought this was a good idea. Both StringTheory2.0 and the Mad Husband have informed me that they knew this would happen. I procrastinated, as I tend to do with everything, but I still think I would have come out okay (if you're going to make a habit of procrastinating, you had better be good at it) if I hadn't fallen victim to The Sock Yarn Mania.

And when I speak of The Sock Yarn Mania, I'm not just referring to my own. If it were just my own, it wouldn't have nearly so many capital letters. It seems to be the season of the sock; I hear rumblings about Red Heart and Lion Brand introducing new sock yarns, Malabrigo sock yarn is already on its way, and my friends are constantly telling me about some new sock yarn, frequently indie, that I have to check out... I see lots of people knitting socks at every knit night, and if sock yarn is about to invade the big-box craft stores, The Mania is likely to grow. (And to shatter our illusions that we're cool and hip because we knit socks. As Natalia says, "trends go to Wal-Mart to die.")

This might be me overthinking it, but I wonder if it's these uncertain times that make sock knitting seem like a sensible thing to do. You only need one skein, which can be had for less than you'd spend making all but the cheapest sweaters, and it keeps you occupied for hours. Then you can show off the finished product! I imagine the stalwart matrons of wartime England putting on a kettle of tea and knitting socks while scanning the sky with binoculars. Kind of like Bedknobs and Broomsticks, but substitute knitting for magic. (That would be a very strange knitter cult movie that everyone else would fall asleep during.) Could something in our cultural memory recall schoolchildren knitting socks for the Great War, and thus it makes sense to knit socks, even if they're actually handpainted merino treats for ourselves and those we choose to spoil this way? (I was thinking the ultimate symbol of devotion would be to knit so many socks that the Mad Husband could wear hand-knit socks every day, but I was also thinking that there's biting off more than you can chew, and then there's biting off so much that you choke on it. Anyway, I don't think he wants pink socks and I've got an awful lot of pink sock yarn to knit up...) And it's a sensible way to indulge your passion for colors without getting stuck with a finished sweater that looks like a clown threw up on it.

Or is it all actually the market itself, cleverly playing on our economic worries and suggesting that we can feel good about knitting socks because they're solid and practical... thus absolving ourselves of guilt as we binge on handpainted merino and gleefully reassure each other "it's sock yarn, it doesn't count."

It's not that sock yarn doesn't count as stash. It's just that I have an entire separate stash of sock yarn.

See? Even when I'm refusing to allow myself to knit socks because I need to crochet for the sale, I'm still obsessing over socks. That's just sad. I am so regretting this.
Posted by Yarn or Death at 10:06 PM 4 comments:

Folks I Yarn With

Places to Get More Yarn

Blog Directory
Who links to me?